I initially wrote a family story back in October 2017 when Liv was 16 months old. Back then, Liv was attending mainstream nursery and was doing well. Since then, a lot has happened, so I thought I’d write an update on what our life looks like now.

Liv will be five at the end of June 2021 and still enjoys dancing, music and messy play; and She also started school in September 2020!

When considering schools, I decided to visit both mainstream and SEN schools to get a feel of them both. While both had their benefits, I ended up deciding that mainstream was best for Liv and was fortunate to find what I feel is the perfect setting for her. As with any child, when you find the right school, you just know it’s the one, and this was the case when I visited Huish Primary School in Yeovil, where Liv now attends. They have been absolutely amazing during her first few terms (especially considering we’re currently in a pandemic which has brought its own challenges!).

I applied for and was successful in securing an EHCP for Liv, and she has a full time 1:1 with her at school. Liv and her 1:1 have such a lovely relationship, and we’re so lucky to have her in our lives. The school put a communication book that Liv’s 1:1 writes in daily, so I know what Liv has got up to – Liv is aged around two years for her speech. However, this is definitely developing well now. While she’s a great communicator and can get her needs across really well, the communication book really helps me to understand what Liv has been doing each day at school/what’s gone well,/what’s not gone well. The school have also introduced an “All about me” book for Liv, which I use to put pictures in of what Liv gets up to when she’s at home and vice versa for school to add to it. This helps Liv communicate with school/her peers and also me as she loves to look through the book at home (especially when she’s in the pictures!).

Since Liv was born, a big fear of mine is whether she’ll make friends and be happy, especially within a mainstream setting. I can honestly say that Liv is a really popular little girl at her school and seems to be loved by all – staff, parents and pupils included. Liv’s 1:1 has recently been waiting out of view at breakfast club drop off to allow Liv to gain some independence of walking into school with her peers’ help, and Liv has no shortage of volunteers to help her. There is literally a selection of little people waiting in the morning as I drop Liv off at breakfast club, keen to hold her hand and walk in with her. I am constantly approached by other parents telling me that their child talks about Liv all the time and “absolutely loves her”. One parent said that her son said to her that “Liv gives the best hugs”, and even his younger sister, who doesn’t attend school yet, asks after Liv on the way to school. I am absolutely blown away at Liv’s integration into mainstream school and the inclusivity of everyone there.

I still get moments where I think ahead and worry about what secondary school will look like for Liv, but mostly, I’m enjoying the now and the fact that Liv is so happy at the school she’s in and is treated no differently by anyone there.

For now, mainstream is definitely the right choice and, whilst it’s a personal choice and needs to be made on an individual basis depending on each child’s needs/abilities, I would encourage any new parents going through the same thought process to not rule mainstream out because of what might or might not happen. With the right setting, our children can thrive in the mainstream, and it’s not all about what benefits our children; it is what our children have to give to others. Liv will teach her peers patience and kindness. Lots of her peers help Liv when she needs a hand to hold to get her to breakfast club, or maybe she needs help to zip her coat up at playtime. She can help teach others that differences on the outside make no difference whatsoever to what’s on the inside, and she will teach others about the importance of inclusion.

We’ve been so lucky to have such a great school. Just recently, with World Downs Syndrome Day 2021, they had all the children in school and staff film a video of them all performing to the Cha, Cha Slide to raise awareness of the condition. It was lovely to see everyone taking part in something that celebrates my daughter’s life, especially as I had no input into what they organised.

Good luck with your journey ahead, and have faith in our little ones – they will continue to amaze us all!

Love from Kelly and Liv xx 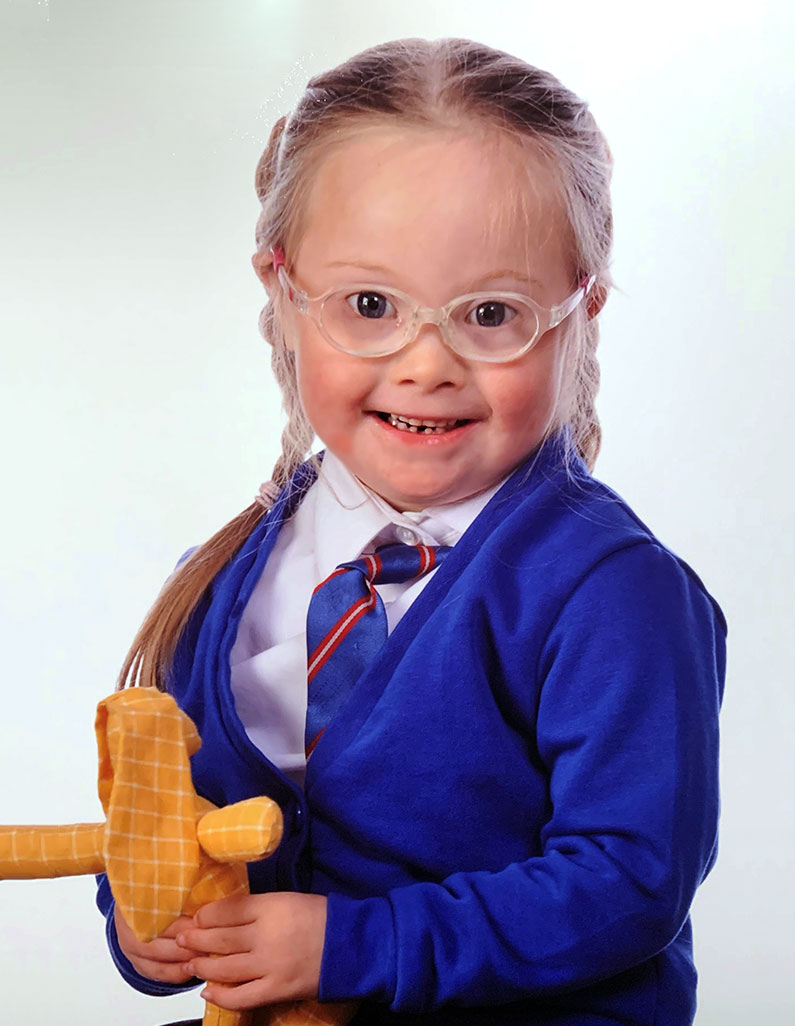 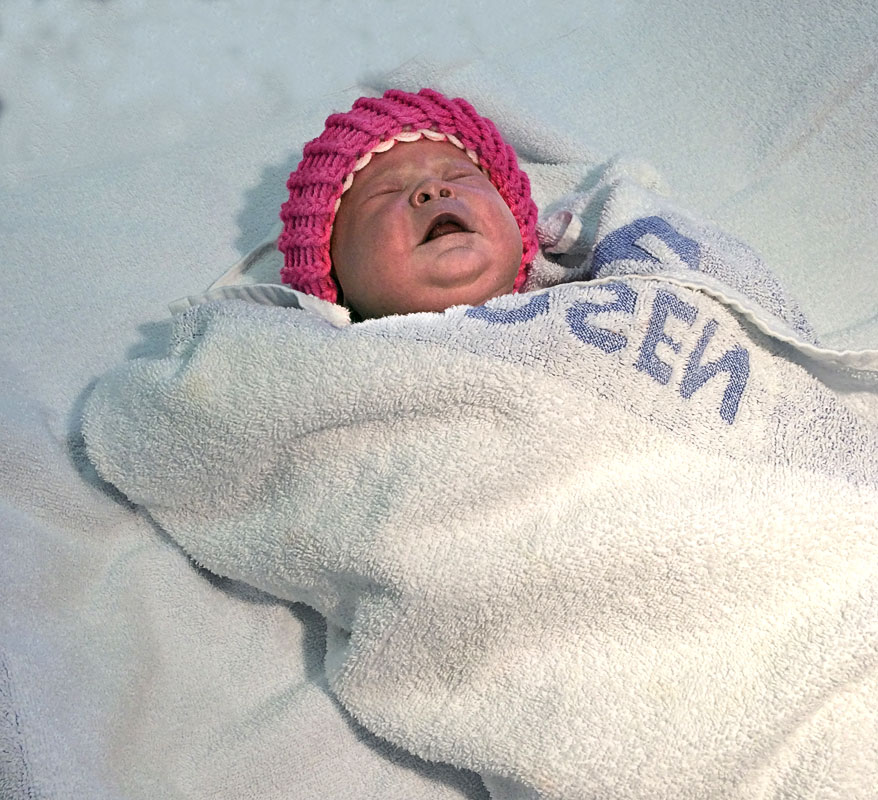 Hi, I’m Kelly and I have a 16-month-old daughter called Olivia. Olivia loves Nutella sandwiches, swimming, In the Night Garden and most importantly, her daddy. Olivia also happens to have Down’s Syndrome.

We had a postnatal diagnosis although we were told our daughter had a 1:65 chance of having Down’s Syndrome following our 12-week scan. My world fell apart when I was actually told, 5 days after Olivia was born, that she had Down’s Syndrome. I thought it was the worst news I could receive and I am ashamed to admit, I felt devastated. 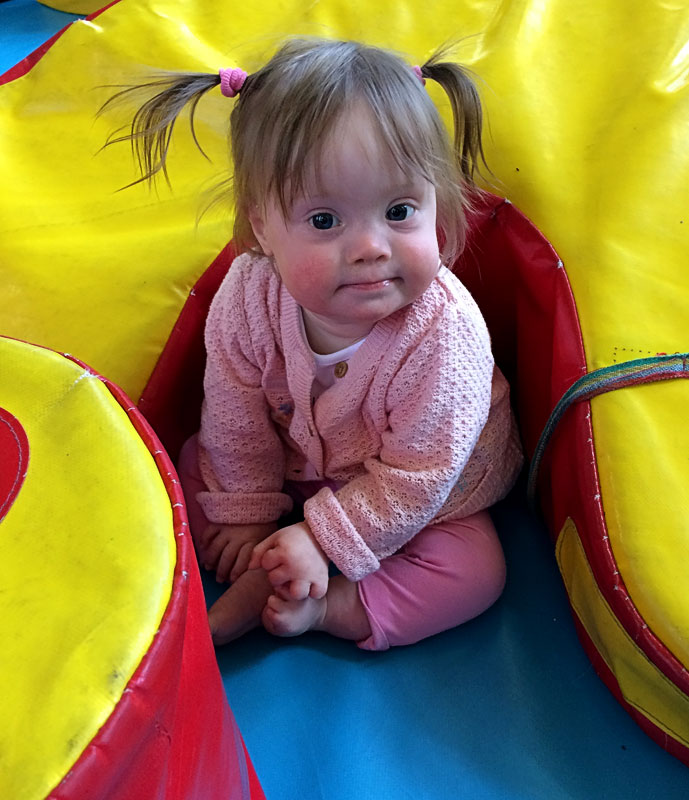 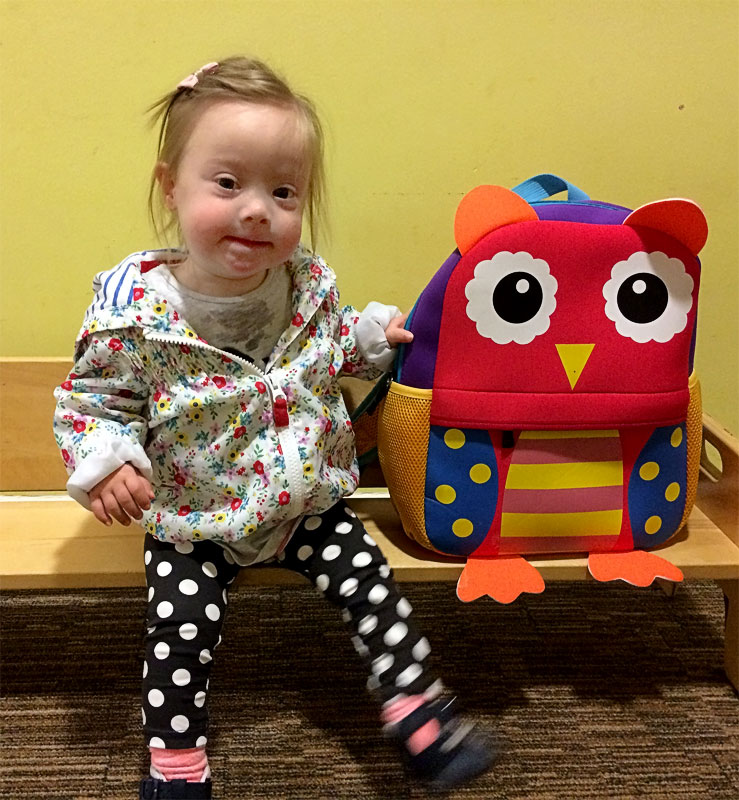 The first few months were incredibly difficult for me, coming to terms with the news we’d received. I was afraid, I pretty much lived in fear of what the future held. As the months passed though, the haze lifted and I realised I had absolutely nothing to fear. Olivia was Olivia, my beautiful baby who I loved with every inch of my body.

Olivia never fails to make us laugh every single day. She’s still very young but she lights up any room she enters and everywhere we go she has people melting. We recently went to Dartmoor for a weekend and went to a local pub for some dinner. Olivia had the attention of every single person in that pub, just by sitting and entertaining her dad and me while eating our meals. She is literally like a people magnet and I absolutely love the way she has no idea of the power she holds over those that she meets.

Olivia attends an amazing mainstream nursery and all the staff love her and she loves them. She’s so happy to go off every morning and doesn’t give me a second glance (no offence caused!).

Although she’s small, she takes absolutely everything in her stride. I can’t even remember how many people have commented that nothing seems to phase her, it’s true. Liv loves her life, she loves to explore and she’s doing so well. I think because she’s always been nosey she’s tried her hardest to do things and she’s starting to walk. She still needs some support but I think in a month or so, she’ll be causing even more, trouble on her feet. 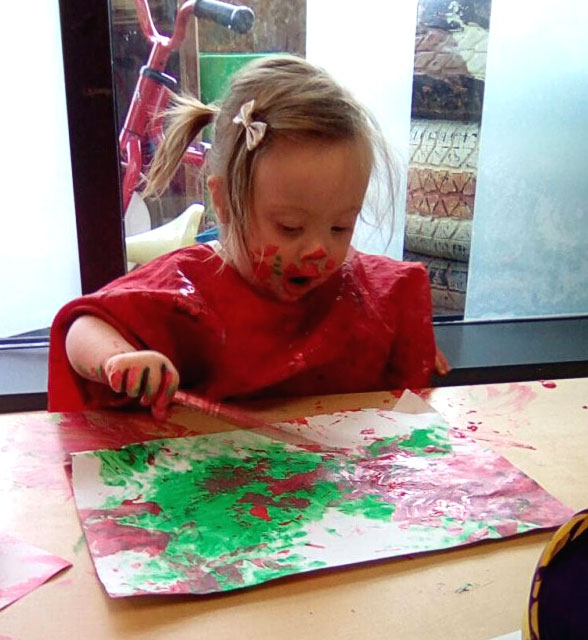 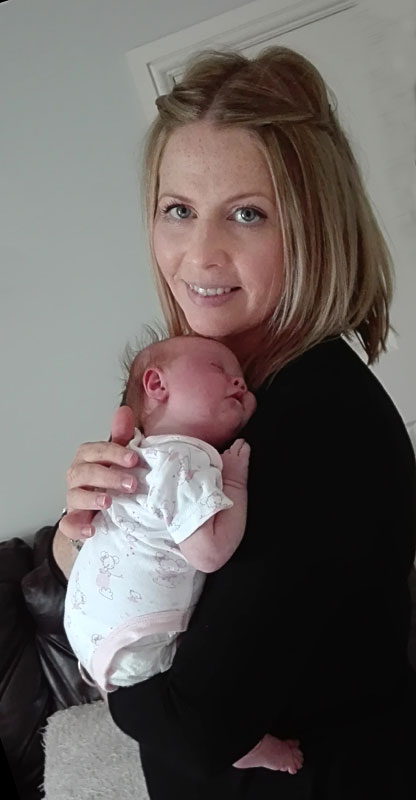 She’s always one of the first babies to get involved with messy play at baby groups, she makes herself centre of attention at our weekly swimming lessons by shrieking in delight, splashing everyone and even being teacher’s helper every week for demonstrations.

I now can’t wait to see what the future holds for Olivia instead of being afraid. We’ve got a lot to look forward to!